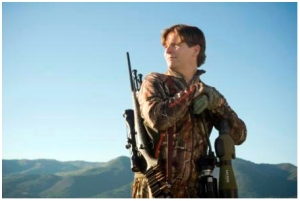 NASHVILLE, Tenn.—Beau Turner, supporter of numerous conservation projects around the world and founder of the Beau Turner Youth Conservation Center, was presented with the NWTF Lynn Boykin Hunting Heritage Award Feb. 16 at the NWTF Convention and Sport Show.

As Director of Natural Resources and Biodiversity for Turner Enterprises, Inc., Turner coordinates and oversees the wildlife-related projects for approximately 2 million acres. He is the son of CNN founder Ted Turner.

In 2008, to achieve his goal to get youth involved in the outdoors, he founded the Beau Turner Youth Conservation Center, which the NWTF has assisted in operating and supervising youth field days.

At BTYCC in Lamont, Fla., children learn about conservation, interact with nature and acquire skills in hunting, fishing, shooting, archery and camping.

“It’s always an honor to receive an award for the work you do,” Turner said. “There have been so many people that have worked together to make this initiative successful. Those folks deserve the credit!”

Turner works closely with the NWTF and many other wildlife conservation organizations.

Turner’s conservation involvement includes his post as Chairman of the Board of Trustees for the Turner Endangered Species Fund and membership on the boards of the Jane Smith Turner Foundation, the Captain Planet Foundation, the Wetlands America Trust and the Peregrine Fund.

Turner said he hopes to use the BTYCC as a model for similar conservation sites throughout the country.

“Beau’s mission has been to get youth involved in the outdoors,” said Kenny Barker II, NWTF Youth Hunting Coordinator. “At the Beau Turner Youth Conservation Center, he’s done exactly that.”

The NWTF, a nonprofit organization, is the leader in upland wildlife habitat conservation. Through dynamic partnerships with state, federal and provincial wildlife agencies, the NWTF and its members have helped restore 17.3 million acres of wildlife habitat, investing $412 million.

Since the NWTF’s founding in 1973, the North American wild turkey population has increased from 1.3 million to 6.5 million with wild turkey inhabiting 99 percent of suitable habitat.

The NWTF is committed to preserving our hunting heritage by helping create the next generation of hunters through our JAKES (Junior Acquiring Knowledge, Ethics and Sportsmanship) program for children ages 5-17. At JAKES events, boys and girls receive hands-on instruction in conservation and outdoor activities.

For more information about the Lynn Boykin Hunting Heritage Award or other convention highlights, call (800) THE-NWTF, visit http://www.nwtf.org or go to http://www.facebook.com/theNWTF.