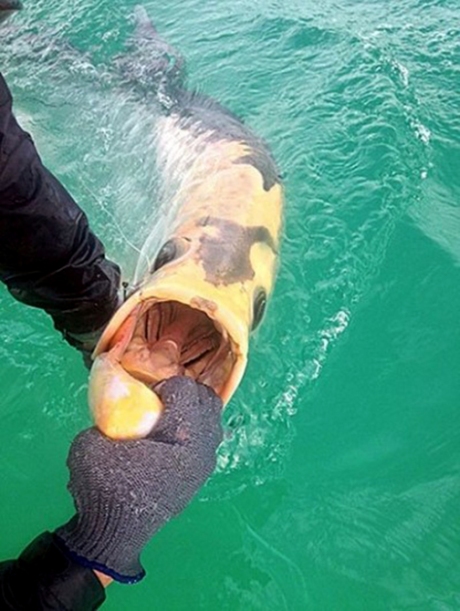 Captain Clark Wright has been fishing for 20 years and runs Wrightstuff Charters out of Sarasota, Florida. But before June 5, he had never seen a piebald tarpon before. On that day, he helped George Seibel bring in a bright orange-spotted creature that looked more like a koi fish than a tarpon, which are normally silver with green or blue backs.

“The first time I saw the fish jump I could see it had bright orange marks all over its head. I said ‘Man, that’s different,’” Wright told OutdoorHub.

Along with mate Matt Smithman, Wright and Seibel were fishing near the coast of Anna Maria using blue crab as live bait. Like many other anglers, Wright had heard rumors of piebald tarpon in the area before. Another angler claimed to have caught and released one of the strange looking fish not too far from where Wright’s boat was, but had no proof of his encounter.

“I thought to myself ‘this is pretty rare, we can’t mess up on this opportunity,’” Wright recalled.

The piebald tarpon on Seibel’s line appeared to be just as hard fighting as any other fish its size, and Wright credited the entire “team” for finally landing the 130-pound fish.

“George fought him hard for about 45 minutes and my mate did an awesome job of bringing it in,” he said. “I got down from my tower and took a DNA sample and about 50 or 60 different pictures. We just stood there in amazement for about a few minutes.”

Taking a DNA sample was important because Wright knew researchers with the Florida Fish and Wildlife Conservation Commission (FWC) would be interested in the strange fish. In fact, when he later called the FWC’s tarpon program, the first question they asked him was whether he was able to get DNA. It will be a few months at least before the data can be analyzed, but Wright said he is anxious to see whether the piebald is significantly different than its normally-colored ilk.

One thing is for certain: nobody Wright knows has ever seen a piebald tarpon. Even FWC biologists were unsure about when the last documented catch or sighting of a piebald was. Wright said that he was told a piebald tarpon had been caught back in the 1930s and is on display in the American Museum of Natural History.

“We’re just lucky,” he said with a chuckle.

And maybe one day another angler near Anna Maria will be lucky as well.

“It was released alive and well and ready to fight another day,” Wright confirmed.