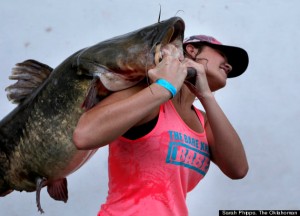 Every year thousands of people flock to Oklahoma for the annual Okie Noodling Festival, hoping for a chance to snag monster catfish with nothing but a pair of hands and a good grip. Lucy Millsap became the first woman to win the tournament when she brought in a 72-pound catch half her size.

Millsap had been chasing fish since she was a child and continued through high school, where she balanced her love of noodling with time for the cheer squad.

Noodling, or handfishing, remains a controversial method of bringing in fish, as the sport can be harmful for both the noodlers and the fish they catch. Catfish noodlers start by finding fish holes in river bottoms and placing their fingers inside them. If a catfish is in residence, it will bite down on the noodler’s fingers and then can be drawn out. In addition to the risk of infection from catfish bites, noodlers also face the dangers of poisonous snakes, snapping turtles, and even alligators. Millsap herself had been landed in the hospital several times because of rusty nails or other hazards. For noodlers, the danger is a part of the excitement.

The Okie Noodling Festival is one of the best-known tournaments for noodlers, which festival founder Bradley Beesley still calls a “secretive, clandestine sport.” He started the festival 14 years ago to promote his film Okie Noodling, a documentary examining the history of handfishing from its early origins in 1775. To Beesley’s surprise the competition continued long after his film debuted, and is now a yearly tradition. Now, the festival provides noodlers with camaraderie and a venue to exchange tips or stories. Beesley continues to promote awareness for the sport, although noodling is still illegal in all but 11 states. Millsap is a resident of Texas, which recently legalized the sport.

Millsap is also a part of the all-female noodler group Bare Knuckle Babes and intends to dine on her monstrous catch. 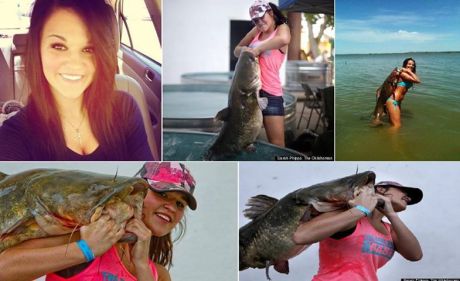