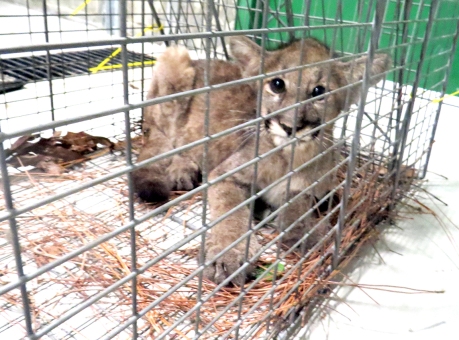 The Florida Fish and Wildlife Conservation Commission (FWC) rescued a 4-month-old female panther kitten in Collier County earlier this month. The kitten was likely orphaned when her mother was struck and killed by a vehicle on U.S. 41 near Collier-Seminole State Park.
When they responded to the scene, FWC staff did not observe any kittens in the area. However, in early October, park staff had photographed a female panther with three kittens.

A construction worker saw and photographed an emaciated panther kitten in the Collier-Seminole State Park campground, which is about a half-mile from where the female was killed.

The FWC responded to the location and set up traps to try to capture the kitten. The next day, park staff discovered the remains of an approximately 4-month-old male kitten. FWC staff continued trapping efforts and, late in the evening on Nov. 2, successfully captured a 4-month-old female panther kitten in woods adjacent to the campground. The FWC immediately transported the kitten to a new rehabilitation facility that opened earlier this year at the Naples Zoo.

Two days later, the FWC responded to a third sighting of a panther kitten in the area and observed an underweight kitten retreating into the woods. Staff once again set traps and deployed trail cameras to try rescuing the last kitten. Unfortunately, after over a week, there was no additional sign of the panther kitten and rescue efforts were suspended.

“We are grateful to everyone who provided us with the information that led to the successful capture of this kitten,” said FWC panther biologist Dr. Dave Onorato.

Because the panther was orphaned at such a young age, it will not be possible to return her to the wild. While she is acclimating to her new surroundings, the kitten will not be on display to the public. She is likely to stay behind the scenes at Naples Zoo at least several weeks while a determination is made regarding a permanent home. When she is placed in a permanent home, her story will be a valuable tool in educating the public about panther conservation, what the FWC does and what the public can do to help.

Drivers are encouraged to reduce speed in posted panther zones to help lower the risk of collisions like the one that orphaned these kittens. Changing speed from 60 mph to 45 mph in a 3-mile-long panther zone only adds one minute of driving time. Florida residents can support conservation efforts like the rescue of this kitten by purchasing a “Protect the Panther” license plate at BuyaPlate.com. Fees from license plate sales are the primary funding source for the FWC’s research and management of Florida panthers.
For more information on Florida panthers, visit http://www.floridapanthernet.org.