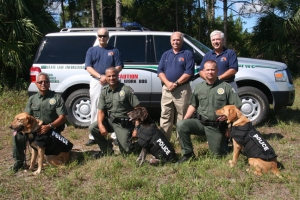 Florida Fish and Wildlife Conservation Commission (FWC) officers Felix Collazo, Jeff Babauta and Jared Cloud each received a bullet-resistant vest today. However, they aren’t going to be the ones wearing them. These vests were actually designed for their K-9 partners Jasmine, Mack and Gus, and donated by the Retired Law Enforcement Association of Southwest Florida.

“K-9s are often the first ones into a dangerous situation,” said Ray Hubbert, president of the nonprofit organization. “We believe all K-9 officers and their dogs should be protected.”

Hubbert’s group raises money to support law enforcement agencies in Southwest Florida and has already provided vests for 16 other local police K-9s. Collazo, one of two FWC K-9 trainers, was instrumental in building a relationship between the association and the FWC.

“We respect our partner agencies’ roles working traditional crimes on the streets,” Collazo said. “With that in mind, we waited until their K-9s were equipped before accepting our vests.”

The vests are manufactured and distributed by Point Blank Enterprises Inc., a Florida company, and will be used during particularly high-risk situations, like felony manhunts.

“These are working dogs,” said Capt. Carol Keyser, statewide coordinator for the FWC’s K-9 program. “They are one of the tools that support our officers. They are valuable members of our agency and an important part of their handlers’ lives. We will do whatever we can to ensure our K-9s are safe and healthy.”

The vests will do just that. Designed to be bullet- and stab-resistant, they will protect the dogs during the dangerous situations they are likely to encounter. For example, FWC K-9s have been involved in several searches for people suspected of shooting law enforcement officers.

“In addition to tracking, FWC K-9s are trained in detection,” Collazo said.

They can sniff out hidden evidence like weapons, ammunition and fish and wildlife.

“We are grateful to Mr. Hubbert and his organization for such a generous donation,” Keyser said. “And we look forward to working with the Retired Law Enforcement Association of Southwest Florida in the future.”