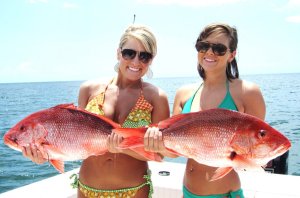 The 2012 Gulf of Mexico red snapper recreational harvest season begins June 1 in state and federal waters. The last day of the 40-day season is July 10.

This year’s state season, which is the same as the 2012 federal recreational red snapper season in the Gulf of Mexico, was set in May at the Florida Fish and Wildlife Conservation Commission meeting.

Florida state waters in the Gulf extend from shore to nine nautical miles; federal waters extend beyond that line to 200 nautical miles.

The Gulf red snapper stock is improving, but the population still needs an increase in the number of older fish for it to be sustainable. Red snapper are estimated to live more than 50 years, but the current stock consists primarily of fish that are only a few years old. Older fish are the key to rebuilding the population because older female red snapper produce more eggs than younger females. This season will help continue to rebuild the red snapper population so that more red snapper fishing opportunities will be possible in the future.

More information about red snapper fishing is available online at MyFWC.com/Fishing by clicking on “Saltwater,” “Recreational Regulations” and then “Gulf Red Snapper.”