Historic Whitetail is Fifth to Score Over 300

MISSOULA, Mont. (May 7, 2013)–Most elk hunters are happy if their bull scores 300 or better. Most deer hunters can’t even picture a whitetail of 300-class proportions.

Of the 13,000-plus whitetails currently honored in Boone and Crockett records, only five–a scant .03 percent–tape 300 inches or more. Remember, 300 inches equals 25 linear feet of antler points, beams, circumferences and spread. Odds of encountering such a colossal trophy in the wild, and taking it in fair chase, are infinitesimally low.

That’s why a recent non-typical whitetail entry in B&C records is so special.

Indiana hunter Timothy Beck last autumn tagged a buck that scores an incredible 305-7/8. The buck was accepted for the Boone and Crockett records book earlier this year. One of only five bucks ever recorded that scores 300 or better, it’s also the fourth largest non-typical whitetail in history, the second largest ever taken by a hunter, a state record for Indiana, and the largest recorded anywhere in North America in nearly a decade.

Read the original news release at the URL below:

“This is one of those deer that come along so rarely, it makes you pause and marvel at the wonders of nature and modern conservation,” said Richard Hale, chairman of the Boone and Crockett Club’s records committee. 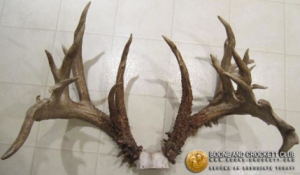 Boone and Crockett Club has released historic photos of all five recorded whitetails that score above 300. To view or download the photos, go to the URL below:

These non-typical trophies include: 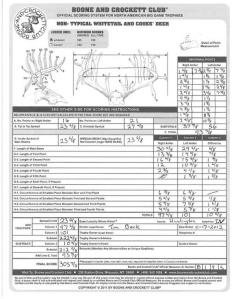 About the Boone and Crockett Club
Founded by Theodore Roosevelt in 1887, the Boone and Crockett Club promotes guardianship and visionary management of big game and associated wildlife in North America. The Club maintains the highest standards of fair-chase sportsmanship and habitat stewardship. Member accomplishments include enlarging and protecting Yellowstone and establishing Glacier and Denali national parks, founding the U.S. Forest Service, National Park Service and National Wildlife Refuge System, fostering the Pittman-Robertson and Lacey Acts, creating the Federal Duck Stamp program, and developing the cornerstones of modern game laws. The Boone and Crockett Club is headquartered in Missoula, Mont. For details, visit http://www.boone-crockett.org.