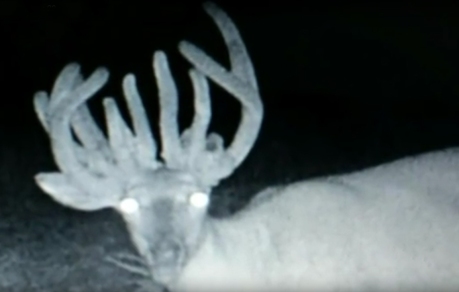 By: Daniel Xu of the Outdoor Hub

This hunter’s prize buck turned out to be a doe. *(VIDEO: https://www.youtube.com/watch?v=UlnfC6g3oFE)

Curtis Russel first saw this 22-point deer on his trail cam, and when he encountered it in the field last month in Christian County, Missouri, he naturally assumed it was a dominant buck. The deer with the massive rack was seemingly courting a group of does and even kept other bucks away.

“I did a 50-yard belly crawl to cut the distance and got to within 175 yards,” Russell told the Springfield News-Leader. “I was using a Remington 700 .30-06, and when I took the shot it was a clean hit. It was dead before it hit the ground.”

Russell soon realized that something was off with the large “buck.” It had a small face, similar to a doe’s, and a lot more fat than a buck should have during the rut. Sure enough, when the hunter checked, it turned out to be a doe after all.

Does with antlers are very rare but still seen—and harvested—occasionally by hunters. Experts say that high levels of testosterone will cause females to grow antlers and exhibit some buck-like behavior.

“There’s a couple different situations where this may occur; one, the doe may simply have a high level of male hormone such as testosterone,” Derek Farwell with the Missouri Department of Conservation, who saw Russell’s deer firsthand, told KY3. “The other situation is maybe a hermaphrodite where it has the reproductive organs of both the male and female deer.”

Does with antlers are still capable of breeding and giving birth to healthy fawns, although they might confuse the real bucks somewhat. How other deer react to antlered females has not been widely studied.

Russel said he plans on either giving the doe to a museum, or setting it on a special place on his wall.