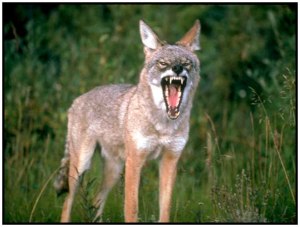 Riverside, Illinois resident Roger Nelson let his five-year-old beagle out for some fresh air when the dog ran afoul of four coyotes. According to WGN-TV, Nelson’s beagle ran back into the house with the coyote pack hot on his heels. Nelson managed to shut the door on the animals, but that did not stop the assault.

“[The coyotes] broke the glass on the screen door, and then they broke two panels on the actual wood door into the house,” Nelson told WGN-TV in an interview. With no other options, Nelson retrieved a high-powered BB gun to shoot two of the coyotes. That seemed to do the trick, as the creatures fled before police arrived.

“Twenty-five years on the job here, and this is the first time I’ve ever seen anything like this,” said Police. Sgt. Bill Gutschick.

Unlike some other wild animals the coyote adapted to living in urban areas, sometimes to the dismay of pet owners. Coyotes are opportunistic by nature and will attack anything smaller than itself as a potential food source. Coyotes are now fast becoming the top carnivore in several metropolitan areas, including Chicago. These animals represent a moderate threat to domestic pets and humans while ranging for food. Wildlife management is trying to keep up with their population rates. An annual average of 7,000 coyotes are harvested in the state of Illinois and hunting is open year round.

“Coyotes do not know the difference between pets and the wild creatures they hunt, so try to protect pets by accompanying them outdoors,” Riverside Police Chief Thomas Weitzel said in a release. “Most importantly, use caution near any wild animal.”

Additional information about coyotes and coyote management in Illinois can be found here.