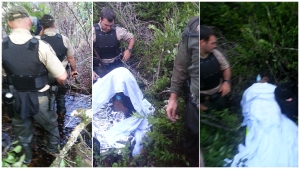 A 55-year-old St. Johns County man is alive, thanks to the efforts of many people, after rescuers found him early Monday, mired deep in a swampy area of Flagler County.
Efforts to find Guss Baker began June 20 by Flagler County Sheriff’s Office deputies, its FireFlight helicopter and members of its volunteer posse.

Just after midnight Monday, Florida Fish and Wildlife Conservation Commission (FWC) Officers Rich Wilcox and Lee Lawshe were three hours into searching for Baker at the Turkey Island Hunt Club. Searchers had been on the property over the weekend but had not been able to locate the man.

A member of the hunt club had called Lawshe late Sunday with some new information and Lawshe rallied FWC Officers and Flagler County deputies around 9 p.m. to try again. The physical aspects of the search were not easy; the swampy area was thick with impenetrable vines, bushes and trees, and it was pitch black despite the full moon.

As they maneuvered their way through the thick swamp undergrowth, the officers kept yelling the man’s name over and over again. “GUSS! GUSS! Are you there? GUSS, we have food and water, and want to help you!” Finally, Wilcox heard a faint response, “Yes.”

Try as they might, the officers could not get to Baker. Baker’s responses became faint and slowly diminished. Lawshe got on his radio and coordinated help with other FWC officers and Flagler, Volusia and Seminole County sheriff’s offices. Flagler responded with deputies, Volusia put a helicopter in the air.

Wilcox remained in the woods to continue talking with Baker while Lawshe left the dark, swampy woods to coordinate FWC officers, Flagler deputies and aerial support.
The Air 1 helicopter from the Volusia County Sheriff’s Office responded and located Baker, using forward looking infrared (FLIR) thermal equipment to  direct Lawshe, FWC Officer Dustin Bonds  and Flagler County Deputy Jennifer Prevattto him. When they found Baker, he was perched, shivering, on a stump in ankle-to-knee-deep water and it was clear to Lawshe that Baker would have to be hoisted out by helicopter because of his physical condition and the dense swamp.

The rescuers used jackets and their bullet-proof vests to try to warm Baker while Officers Wilcox and Ryan Campbell carried in water and blankets as they waited for the Seminole County Sheriff’s helicopter Alert 1 to arrive with its rescue hoist. Upon arrival, a rescuer was lowered from Alert 1 to Baker and the officers. Baker was then hoisted from the swamp to the helicopter and flown to nearby Flagler County paramedics who transported him by ambulance to Florida Hospital Flagler in Palm Coast.

Information received by the FWC indicates Baker is still recovering in the hospital and is expected to make a full recovery.

“I’m sure it has been a harrowing few days for Mr. Baker,” said Lawshe. “Everyone involved in his rescue used their skills and training, and worked closely together to find him and bring him out safely. I am relieved we found him alive; I only wish we could have found him sooner.”