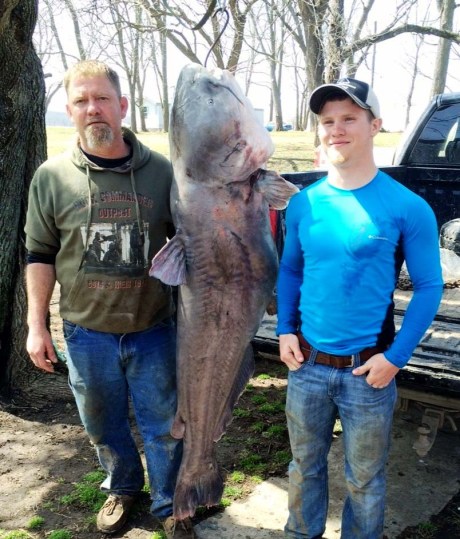 *(Courtesy of The Fishing Wire)

JEFFERSON CITY, Mo. – Burr Edde III of Malta Bend became Missouri’s most recent record-breaking angler when he landed a giant blue catfish on a stretch of the Missouri River in Saline County using a trotline. The new “alternative method” record blue catfish caught by Edde on March 21 weighed 120 pounds, 8 ounces, with a length of 55 and 1/8 inches and a girth of 45 inches. Edde used cut Asian carp as bait.

The new giant broke the previous alternative-method state-record blue catfish of 117 pounds caught more than 50 years ago on the Osage River in 1964.

Missouri Department of Conservation (MDC) staff verified the record-weight fish on March 25 using a certified scale at Bass Pro corporate headquarters in Springfield. The fish was preserved on ice for official weighing.

“Oh my goodness! That’s a big fish,” Edde recalled when he first saw the giant. “How am I going to get this one into the boat?! It was definitely an experience of a lifetime to catch one that big. I was blessed. And there are still lots of them out there!”

The longtime angler said he would have liked to release the record fish back to the river or donate it to the fish tanks at Bass Pro, but it didn’t survive long enough. “It’s too big to actually have mounted, but I’m getting a replica made.”

Missouri record fish are recognized in two categories: pole-and-line and alternative methods. Trotlines are considered an alternative method in Missouri and consist of a length of heavy fishing line stretched across a section of water and secured at both ends. A series of shorter drop lines are attached to it every several feet with baited hooks at the free ends. Other alternative methods include: throwlines, limb lines, bank lines, jug lines, spearfishing, snagging, snaring, gigging, grabbing, archery, and atlatl.

For more information on state-record fish, visit the MDC website at mdc.mo.gov/node/2476