Ravenous 14-foot python caught with 3 deer in its gut! 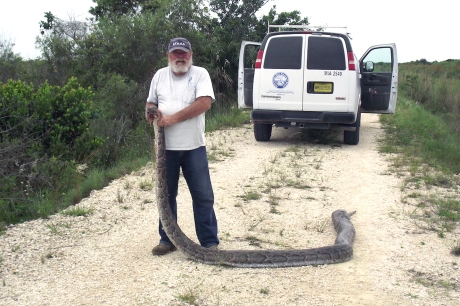 *(Story and photos courtesy of http://www.foxnews.com/)

A Burmese python in the Everglades with a penchant for venison gulped down three whole deer — one doe and two fawns — before wildlife officials captured and euthanized it, a new study reveals.

The python probably attacked and ate the deer at different times over a 90-day period, Boback said. That time span may seem long, but it’s actually quite surprising that a snake would eat three enormous meals in a relatively short window, Boback told Live Science. [Photos: This Invasive Python Ate Three Wild Deer]

“If a python is capable of eating three deer in three months,” what else are they eating that we don’t know about, he asked. “We don’t even know how many of them are out there [in the Everglades].”Burmese pythons are native to Southeast Asia, but for reasons still shrouded in mystery, they became established in the Everglades during the 1990s. The snakes can grow to be up to 18 feet long in the Everglades (and up to 26 feet long in Southeast Asia). They use their strong muscles to wrap around prey, obstructing their victims’ blood flow until circulation stops.

Burmese pythons are native to Southeast Asia, but for reasons still shrouded in mystery, they became established in the Everglades during the 1990s. The snakes can grow to be up to 18 feet long in the Everglades (and up to 26 feet long in Southeast Asia). They use their strong muscles to wrap around prey, obstructing their victims’ blood flow until circulation stops.

It’s unclear how the python attacked the deer, but the snake may have hid in the water, waiting for the deer to stop for a drink. That would have left the deer within striking distance of the snake, Boback said.

The 15.6-foot-long female snake was almost done digesting its three massive meals when officials caught and euthanized it on June 3, 2013. A necropsy, or animal autopsy, revealed an empty stomach but intestines packed with poop.

The fecal matter was immense: more than 14 lbs., or 13 percent of the snake’s body mass , Boback said. Study co-researchers Teresa Hsu and Suzanne Peurach, scientists at the Smithsonian Institution, sieved through the excrement and found mats of fur and several undigested hooves, bones and teeth, indicating that the python had eaten white-tailed deer (Odocoileus virginianus) — and not just one, Boback said.

It’s no surprise that the fur, hooves and teeth were undigested, as pythons can’t break down keratin or enamel, Boback said. However, they can digest bone, which would explain why the researchers found only fragments of bone in the dung, he said.

The size and shape of the hooves — as well as the presence of a deciduous, or baby, tooth — indicated that the adult doe was at least 1 year old and about 99 lbs., one fawn was about 1 month old and 37 lbs. and the other fawn was about 2 weeks old and 29 lbs., the researchers wrote in the study. [In Images: Hungry Python Eats Porcupine Whole]

Pythons are ravenous eaters, and they’ve been wreaking havoc on the Everglades ecosystem, Boback said. The hungry snakes hunt the region’s native animals, including birds, mammals and at least one reptile — the American alligator (Alligator mississippiensis), the researchers wrote in the study.

Although other Everglades studies have shown correlations between the presence of pythons and a drop in mammals — such as raccoons, opossums, bobcats and rabbits — the new report shows concrete evidence that pythons can eat more than one deer within a short period of time, Boback said.

“It just begs the question, ‘How often are they eating these things?'” he said.

The study was published in the November issue of the journal BioInvasions Records.