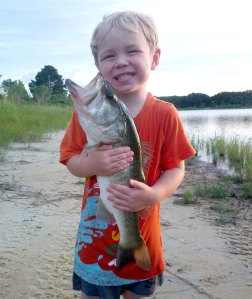 This past spring, Florida Fish and Wildlife Conservation Commission (FWC) biologists tagged 136 trophy largemouth bass greater than 8 pounds in Florida’s public waters. Each trophy bass had a yellow plastic dart tag inserted into the back of the fish just below the dorsal (back) fin. Each tag has a unique number that identifies a monetary reward value and information on how to report catches.

Tagged bass came from 41 lakes and rivers that varied in size, water quality, habitat types, fish populations and angler demographics. Angler catch and harvest rates vary between lakes and rivers, so this approach allows for a more informed statewide estimate.

After six months, results are already revealing. So far, 21 percent of tagged trophy bass have been caught and reported, and 83 percent of them were released alive. Anglers fishing in tournaments accounted for 22 percent of reports. Thirty percent of trophy fish reported were caught on live shiners. Interestingly, 28 percent of tagged bass heavier than 10 pounds have been caught, but just three of seven (43 percent) of those were released. This shows bigger bass are equally susceptible to capture but suffer increased harvest. Most anglers harvested trophy bass to have a skin-mount made, rather than for food.

The most recent capture was a fish stocked by the FWC as a fingerling but weighed more than 10 pounds when it was caught and released in Lake Talquin.

Another recent tagging study by the FWC and University of Florida revealed that 20 percent to 35 percent of all largemouth bass longer than 14 inches were caught annually by anglers.

Since trophy bass typically take six to 10 years to reach that size, it’s evident that recycling plays an important role. Although catch rates of individual trophy bass may be about the same as for smaller fish, there are fewer trophy fish.

This information will provide an important baseline for when TrophyCatch (see below) launches in October. The FWC will continue the statewide tagging study for the next five years to estimate changes in catch-and-release rates of trophy fish and angler participation.

Anglers should look for tagged fish. The plastic tags are 5-inch yellow streamers with “Trophy” printed on them, followed by a number, reward value and contact information. Over time, tags may get covered by algae, which can be rubbed off to reveal tag information.

If you catch a tagged fish, cut the tag as close to the skin of the fish as possible and return the tag to the FWC. Anglers may release or harvest tagged bass as they normally would, depending upon local harvest regulations; however, only released bass are eligible for separate TrophyCatch recognition and rewards. For details or to report tags, call fisheries research biologist Jason Dotson at 850-363-6037.

This tagging study was initiated partially to implement the Black Bass Management Plan that was developed with input from biologists, anglers and stakeholders (MyFWC.com/Fishing), and which the FWC approved in June 2011. Anglers indicated that greater opportunities for trophy-size fish should be an important component of the plan. So the FWC made trophy largemouth bass management a priority and plans to launch a trophy bass documentation program called TrophyCatch in October (www.TrophyCatchFlorida.com).

Instant licenses are available at MyFWC.com/License or by calling 888-FISH-FLORIDA (347-4356). Report violators by calling 888-404-3922, *FWC or #FWC on your cell phone, or texting to Tip@MyFWC.com. Visit MyFWC.com/Fishing and select “more news,” or scr.bi/Fish-busters for more Fish Busters’ Bulletins.