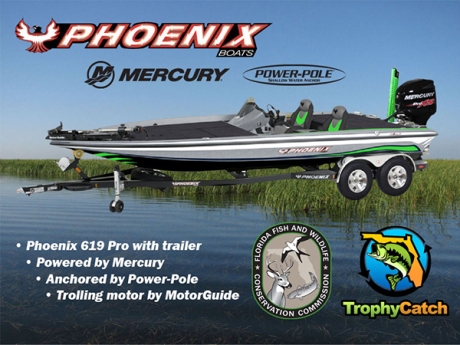 And, the winner is — Ed Prather (41) from Middleburg. The Florida Fish and Wildlife Conservation Commission (FWC) randomly selected Prather as winner of a $40,000 Phoenix Bass Boat. A young lady from the audience at Bartow Ford’s Winter Wonderland event pulled his name from a bucket containing the names of five TrophyCatch finalists. The five finalists had previously been selected randomly from 11,230 individuals, who registered free-of-charge at TrophyCatchFlorida.com.

TrophyCatch is the FWC’s citizen-science, conservation rewards program for anglers who catch, document and release largemouth bass greater than 8 pounds. Each season they have a drawing from among registered anglers for a boat. Industry partners donate the boat and other TrophyCatch prizes at no cost to the FWC, to help encourage conservation and citizen-science. The Phoenix 619 Pro bass boat and trailer came with a 200-horsepower Mercury outboard, MotorGuide trolling motor and Power-Pole anchoring system. This year, Bartow Ford added a surprise gift of $1,000 towards the purchase of one of their vehicles to pull the boat.

Jon Fury, deputy director of the FWC’s Division of Freshwater Fisheries Management, was at the event with KP Clements, TrophyCatch director, to conduct the drawing. Each of the other finalists won a consolation prize including a Bass Pro Shops gift card, Mercury Marine apparel and other goodies.

Every angler who successfully caught, documented and released a TrophyCatch during Season 3 (Oct. 1, 2014 to Sep. 30, 2015) earned 10 additional chances to be in the drawing. The final odds of being one of the finalists were five in 28,260. Prather had a 10-pound, 4-ounce bass from Rodman Reservoir approved this year, and had previously submitted an 8-pounder that qualified for Big Catch before he knew that you had to have a photo of the entire bass on the scale to qualify for TrophyCatch rewards.

Prather often fishes alone from his kayak, but his favorite fishing partner is his 9-year-old daughter, Alyssa. He is a long-time member of the Northeast Florida Chapter of Heroes on the Water, a program that helps warriors and veterans rehabilitate and reintegrate through kayak fishing and the outdoors.

“I look forward to representing TrophyCatch when people ask me about the program,” said Prather.

He plans to stop by Bass Pro Shops in Orlando this Saturday at 5:30 p.m. when FWC staff will be honoring 15 anglers who entered a total of 17 Hall of Fame bass weighing more than 13 pounds each. They will also award the Season 3 championship ring at that time