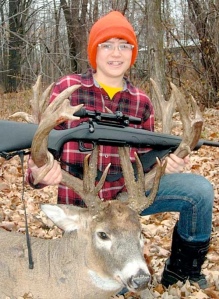 A patient 12-year-old boy has the story of a lifetime to tell following a weekend hunt last Saturday, November 3. Dylan Beach-Bittner of Motley, Minnesota took a nearly 30-point buck known around his community as the “monster buck” from a tree stand while out hunting with his step-father on his aunt’s farm roughly eight miles west of Sebeka.

Beach-Bittner saw the deer come into view about 100 yards away. He waited until the deer approached closer to the stand and turned broadside then he fired of his .270-caliber rifle and watched as the deer fell one time, got up to walk a few feet again and fell for a final time.

Beach-Bittner and his step-father came upon the animal, who was determined to be a 27-point atypical buck. ”I was surprised at how big he was,” Beach-Bittner told the Brainerd Dispatch in Minnesota. “It seems like it gets bigger every time I see it,” he said. The buck weighed 229 pounds and required the help of four people to load into a truck.

The deer will be green scored and taken to a taxidermist for a full shoulder mount. Beach-Bittner’s mother, Jeannie Beach, said the American Whitetail Association has already contacted the family about showing the mount.

by Outdoor Hub Reporters on November 8, 2012