Two Mexican commercial fishermen on the waters of the Gulf of California were shocked on Sunday when they realized they had nearly 20 feet of nature’s most ferocious predator caught in their nets— nets that were designed to catch slightly smaller fish. According to local information, the great white was just under 20 feet in length and weighed about 2,000 pounds.

Fortunately for the fishermen, whose full names are not yet know but have been referred to as Guadalupe and Baltazar, the great white was already dead.

“We were amazed and immediately realized we had a huge, dead, great white shark, and then we thought what are we going to do?” Said Guadalupe in an interview with Pisces Sportfishing.

It took over an hour for the fishermen to haul the carcass to shore because their boat was powered by a simple, 75-horsepower outboard motor and, at 22 feet, their boat was barely longer than the shark they were hauling.

It took 50 people just to drag the beast onto the shore.

“Guadalupe and Baltazar swore they had never seen a fish this big before in their lives,” the Pisces blog stated. “Even though on March 13 of this year, some of their fellow fishermen had also caught a great white, which had weighed 990 pounds.”

The shark was hauled in off the coast of Sonora in northwestern Mexico. The Mexican Department of Environmental Protection is now investigating the death of the animal. 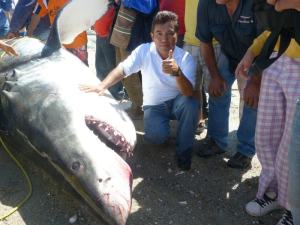