HARDIN, Ky. (March 22, 2011) – Murray State University is gearing up to host the National Guard FLW College Fishing National Championship April 7-9 on Kentucky/Barkley lakes. The University of Florida team of Jake Gipson and Matt Wercinski won the first ever national championship last year and will defend their title this year as they face-off against 24 other top teams from across the country. The national championship features a $100,000 first-place award and is a three-day nationally televised event.

“If water levels continue to be high it’s really going to challenge the young anglers. The fish will be like trying to find a needle in a haystack. There will be small areas loaded with fish and teams are going to have to find those areas. They should look for the best quality water they can find; clear shallow water is going to produce the best.

“If water levels drop the fish could start to spawn and it will become easier to find the fish, especially in the flatter pockets. I would recommend fishing in front of bushes dead-sticking soft plastics like Strike King’s Ocho or using a light Carolina Rig with a lizard,” Rose went on to say. “This really is a unique time of year to fish on Kentucky Lake and for the handful of young anglers that figure it out it will be some of the best fishing they will ever see.”

Each team competing in the national championship will be sporting jerseys and fishing out of wrapped Ranger boats towed by Chevy trucks for the competition. The 25 teams are listed below: 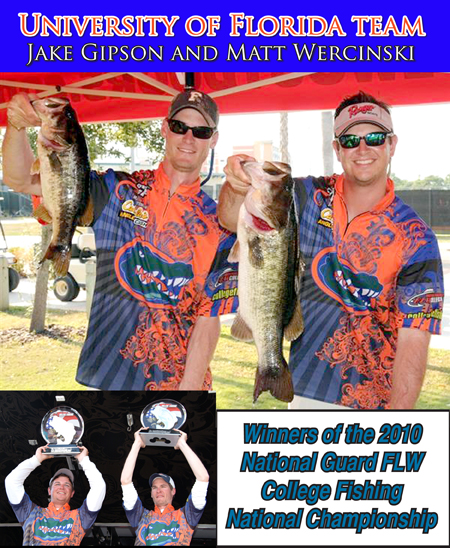 Four regular-season events were held in each division, Central, Northern, Southeast, Texas and Western. The top five teams in each qualifying event advanced to one of five televised three-day National Guard FLW College Fishing Regional Championships. The top five teams from each of those regional tournaments are now poised to compete in Kentucky for the title of National Guard FLW College Fishing National Champion and will qualify for the 2011 Forrest Wood Cup presented by Walmart. The Forrest Wood Cup, the world championship of bass fishing, will be held Aug. 11-14 on Lake Ouachita in Hot Springs, Ark., and will offer these young anglers the opportunity to compete for a top award of $600,000. The national champions will also receive use of a wrapped boat and Chevy truck for Cup competition.

Daily takeoffs for the national championship will be at 7 a.m. at Kenlake State Park Marina located at 888 Kenlake Marina Lane in Hardin. Daily weigh-ins will be at CFSB Center on the campus of Murray State University located at 1401 State Route 121 North in Murray.

FLW Outdoors will be hosting the College Fishing Festival, which runs from 2 to 4 p.m. Thursday and Friday, April 7-8 and noon to 4 p.m. Saturday, April 9, at the CFSB Center.  Activities include a sports zone, tailgate games, climbing wall and Ranger boat simulator. Bucky Covington will perform a free live concert on Saturday, April 9 at 2:30 p.m. at the CFSB Center prior to the final weigh-in and crowning of the national champions.

The national championship awards the top team with $50,000 cash, a Ranger 177TR with a 90-horsepower engine wrapped in school colors for their school’s bass club and $25,000 for the school they represent. FLW Outdoors has awarded over $1.8 million in scholarship money to over 100 colleges and universities. College Fishing events are free to enter, boats and drivers are provided by FLW Outdoors and all collegiate teams receive a travel allowance.