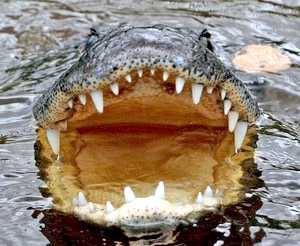 The Florida Fish and Wildlife Conservation Commission (FWC) cautions the public that snakes can be on the move as they flee flooded areas.

“When you are out in your yard, especially if you have standing water, be focused on your surroundings and be on the lookout for snakes,” said Eric Dennis, FWC biologist.

The FWC has information about the various snakes, both venomous and non-venomous, that live in Florida. Check out the Living with Snakes area of MyFWC.com.
“Alligators can also be on the move with the rising water,” Dennis said.

If you see alligator somewhere it shouldn’t be, don’t attempt to move it or grab it. Call the FWC’s Nuisance Alligator Hotline: 866-FWC-GATOR (866-392-4286). The FWC brochure “A Guide to Living with Alligators” has plenty of helpful advice. It is available for download at MyFWC.com/Alligator.

“Although the FWC doesn’t handle insects, another problem that may be encountered is floating mounds of fire ants that are also attempting to avoid the rising waters,” Dennis said. “I’ve seen this in past floods, and you definitely don’t want to get near them. The entire colony of ants abandons their mound when floods arrive. They then bind together into a ball that floats until the ants drift to higher ground.”

Displaced wildlife can be seen during unusual times of day and in unusual places, such as a residential area.

“If you do see an animal in your yard, the best course of action is to leave it alone. Don’t approach it. Don’t try to feed it. The animal is not trying to relocate to your property; it’s most likely using your property as a corridor to find a new, drier place to live,” Dennis said.

Dennis also said it’s important that nothing is left out around the property that could inadvertently attract wildlife. Attractants include trash cans, unsecure pet food and pet food dishes, barbecue grills, wildlife feeders for birds or squirrels, and compost piles for food scraps. Secure these items so wildlife does not have access to them.

“If you see an animal that is hurt, don’t approach it. The animal could respond badly to your kindness and end up hurting its would-be rescuer. If it isn’t hurt, it may be stressed from the changes in its environment and still strike out, even if you’re attempting to help it. Remember it’s a wild animal,” Dennis said.

If you see something really out of the ordinary, you can always report it to Wildlife Alert at 888-404-3922.